After its first stage at Galerija Kortil in Rijeka and Kunsthalle Graz, the reflection on the role and power of images in contemporary society, between individual consciousness and mass culture, proposed by Talking (about) Images continues in Trieste, at MLZ Art Dep gallery, from September 28th to November 18th 2018.

The project, curated by Francesca Lazzarini and Marta Rovetta for Cultural Inventory, with the support of the Region of Styria, develops through four exhibitions and as many open laboratories with eight artists of various nationalities and different means of expression - The Cool Couple, Severin Hirsch, Kate Howlett-Jones, Neža Knez, Maryam Mohammadi, Nika Rukavina, Alessandro Sambini and Christoph Szalay -, exploring the relationship between images and the reality they represent, the mechanisms that regulate their production and diffusion, the ambiguities that they can generate, but also their potential as a universal and shared language.

In fact, unlike words, images do not require translations to be read by people in different part of the world, being apparently a limitless tool for global communication. Nevertheless, their interpretation is anything but objective: images are intrinsically ambiguous. Due to their power of persuasion, images play a key function in the capitalist and globalised system: they are vehicles for ideology and one of the main weapons in the struggle over an arena of strategic importance today, the collective imaginary.

So Talking (about) Images focuses on images as an autonomous language, as in the work Everyday by The Cool Couple, which assembles meme GIFs reflecting on the influence on our existences of “secondary visuality”, the installation Imag(in)e Ka-mi-ze by Neža Knez, on images as a childrens’ mean to design a better future, the work Lemmings by Severin Hirsch, that spurs for an independent use of images and texts conceived as equal symbols, and Maryam Mohammadi’s Memories Icon, that explores the role of images in shaping personal memories as well as unconscious visual cultural effects; at the same time, the show reflects on the potentialities and limits of this language: on its interaction with other means of expression, as in Kate Howlett-Jones’s Pocket Dictionary of the world’s Most Iconic Photographs, where every image-entry is defined by a poetic text resulting from mixed commentaries found from the internet and the installation It’s not your time to get your angel’s wings just yet through which Christoph Szalay takes the iconic story of Titanic, and its video game re-enactment as a starting point to resonate on representation and on the negotiation of the real, as well as on the responsibility related to its production and fruition, as in the video and the performance by Nika Rukavina, The Illusion of Truth, on the propagandistic and ideological use of images and the passive reception of their flow, and in Spelling Book by Alessandro Sambini, which presents the analogue outcomes of a machine learning process raising questions about the meaning of education and the responsibility of image-making. After the first opening in Rijeka, the video installation The Images of our Dreams by Discipula has been included in the exhibition, building speculative scenarios concerning images and their relationship with human beings. 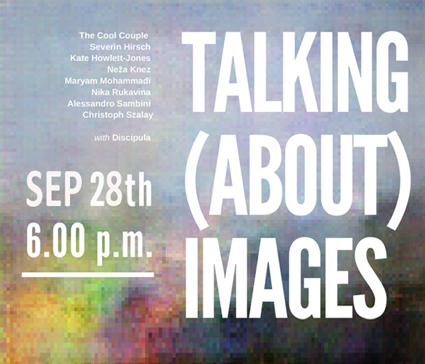